If you were to ask someone which football team they supported, their answer might surprise or even infuriate you. “How can you support Liverpool if you’re just down the road from Old Trafford?” you might ask. And if their team was not the same as yours, much of your conversation would be trying to convince each other why they should switch allegiances – and neither of you would win THAT battle. What is it about loyalty to teams or individuals that drive us so much? Why do some punters follow the trainer (regardless of the horse he has running) while others put their cash on the jockey irrespective of the beast he happens to be sitting on?

Usain Bolt nailed his colours firmly to the mast when he pleaded with Prince William not to let young George grow up in a Villa shirt. Too late, Usain, Villa had already sent the gift, with “HRH 1” embroidered on the shirt! And that leads to the next questions, why does the Queen support Arsenal, or Prince Charles, Burnley? 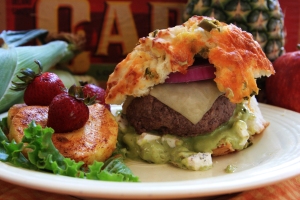 Jon Rutter’s team of stocktakers can also tell of the times they have been asked the same questions by their customers while they’re in the middle of working on some detailed formulae to help improve their GP, when out the blue the casual remark is thrown out, “so, who’re you supporting on Saturday?” But any good stocktaker worth their salt has developed the knack of knowing their client’s preferences beforehand and can hold that type of sports-talk conversation without coming to blows about team colours.

It could also be said that supporter’s preferences extend to pubs and restaurants for the same reasons – “how can you possibly drink light ale when you know lager is best!” Or, “you ALWAYS have the cheese burger and then ice cream … why don’t you at least try the scallops? They’re ALWAYS delicious every time I have them.”

But those who love their hamburgers may be in for a shock in years to come, as apart from the price increase, the composition of the patty might put them off. In fact, those who choose some types of seafood might also blanch a little as they discover that what’s on their plate is the same as on ‘burger lover’s’ plate too. If science continues to make giant strides into the area of engineered foods, we could all be eating the same stuff … just dressed up a bit differently with a bit of garnish and an olive (if they’re still around) to ensure that they are served as separately named choices on the menu.

Artificially grown meat, or fish or poultry will be available if the Dutch (bless them) have their way. The mind boggles at what some poor stocktaker will make of that scenario when they try to plan for the local restaurant owner – “you’ll need 24 tins of ArtiProtein for next week, mate, that’ll keep your 36 item menu going. Your customers will be spoiled for choice!”

At least we’ll still have our football teams that we could argue about.

One thought on “… coming to a restaurant near you, test tube meat!”